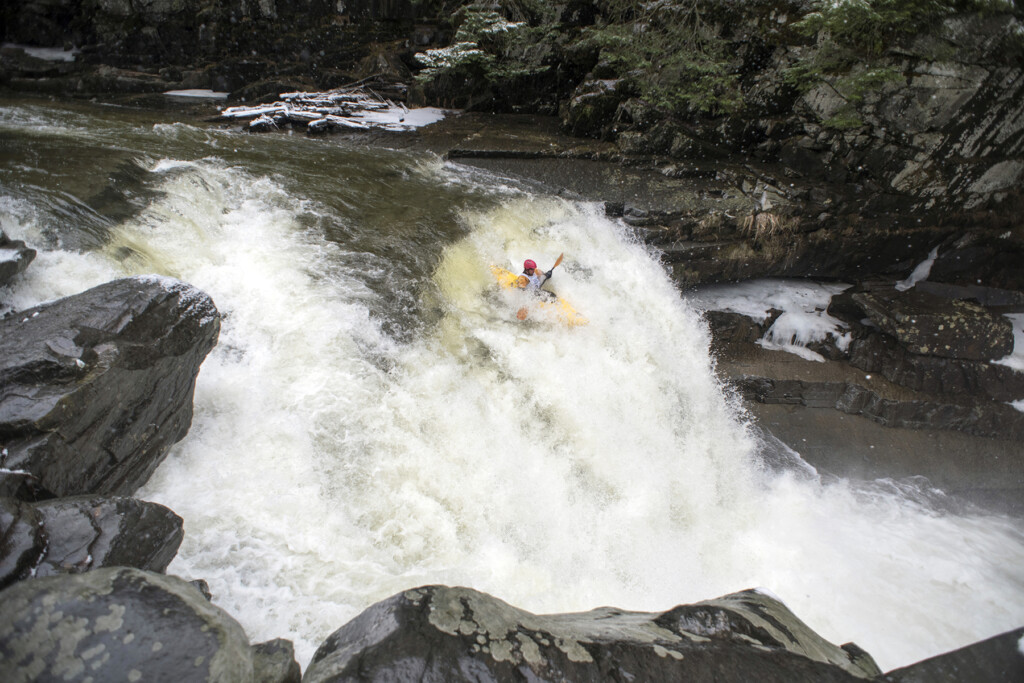 I’ve loved paddling since going on a three-week long canoe trip in Northern Quebec in 1987 with my brother and eight other young campers. It was like Lord of the Flies, only in canoes. I’ll always remember running a roaring rapid in a wood and canvas canoe with my stern mate, Denis Dumont, a burly French-Canadian guy. We paddle hard through it and promptly flipped the boat, camping gear and all. I lost my first camera, an Olympus, after it was submerged in the cold water. Note to self: dry bags are good. 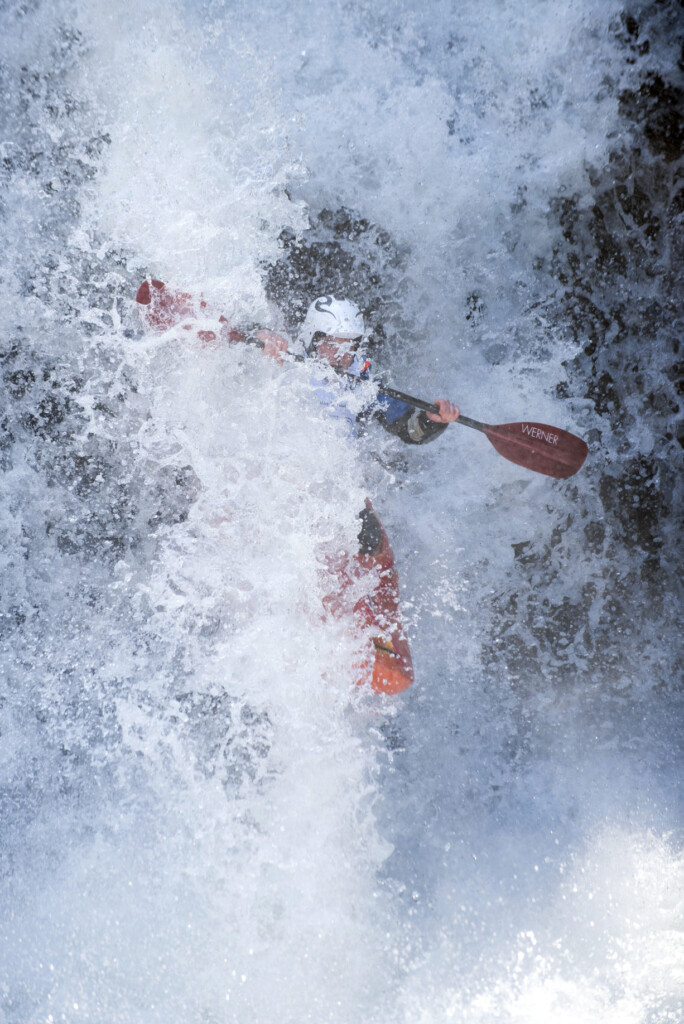 Ever since my brother took a whitewater paddling course at the Nantahala Outdoor Center in North Carolina in the eighties, I, too, have admired whitewater kayaking. In 1987, he and I jointly bought a yellow Royalex Mad River canoe, which was advertised as indestructible. Later I bought a lake kayak to explore the calm waterways of central Vermont, more my style. 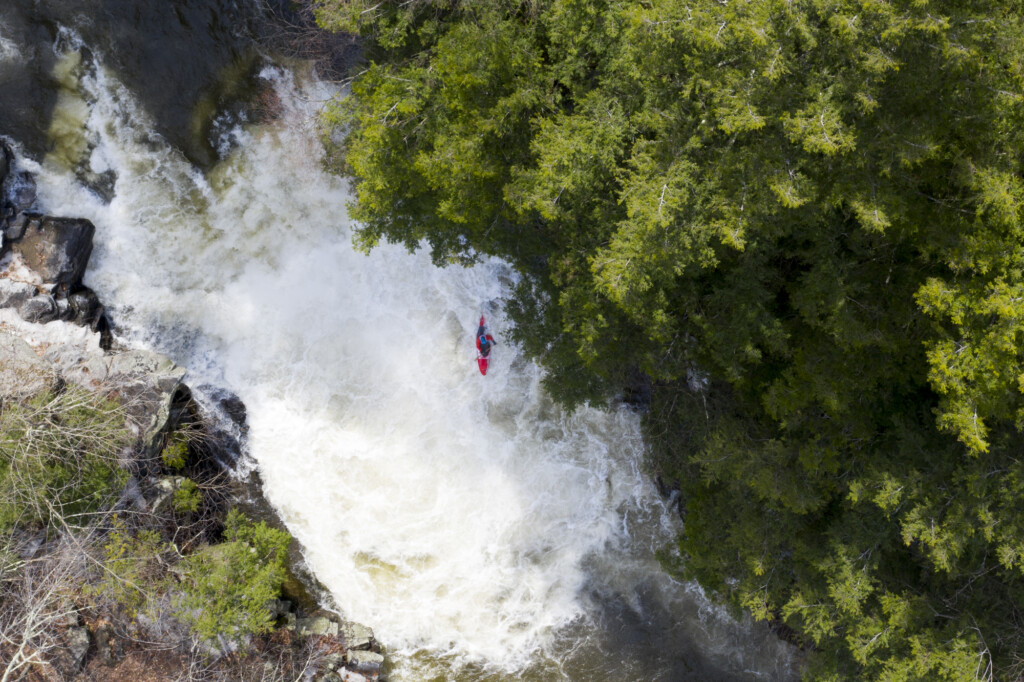 Each April for the past eleven years dozens of kayakers have flocked to the base of Lincoln Road in Bristol, Vermont to race down a stretch of Class IV rapids, shoot over Bartlett Falls and tap a buoy hanging from a rope. Like spring daffodils popping out of the cold ground, the New Haven Ledges Kayak Race is a seasonal milestone and marks the yearly transition from winter’s snow into spring’s explosion of watery life. According to the American Whitewater Association, the Class IV Rapids in the race are for advanced paddlers and include “intense, powerful but predictable rapids requiring precise boat handling in turbulent water. Depending on the character of the river, it may feature large, unavoidable waves and holes or constricted passages demanding fast maneuvers under pressure.” 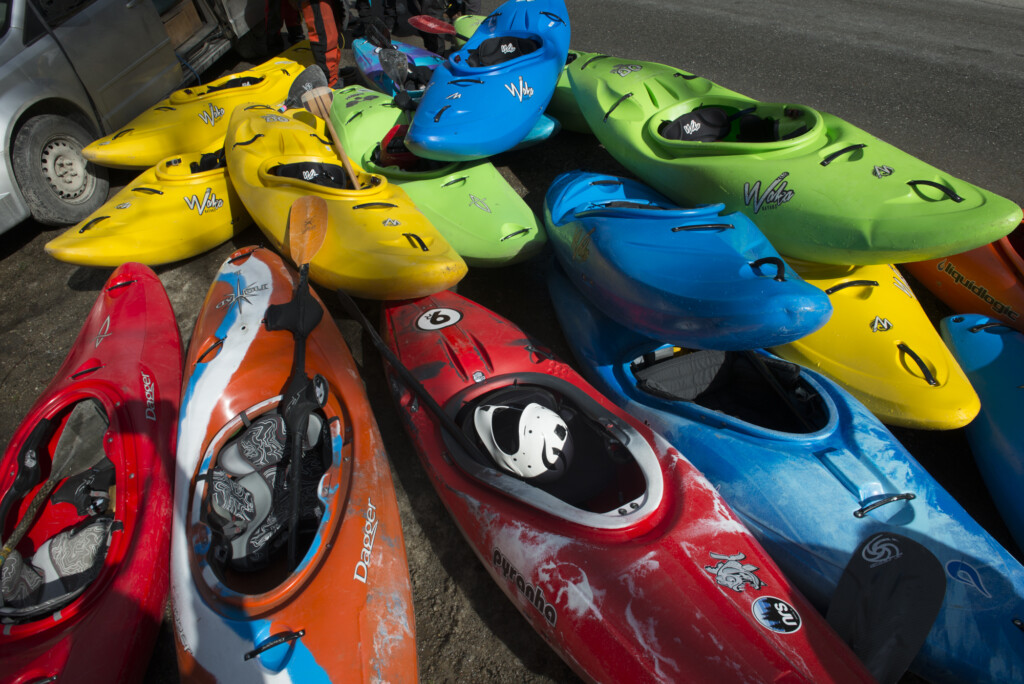 The race started with Dave Packie and Ben Guttridge when they were joking about who was faster paddling down the river,” says Ryan McCall co-director of the race,“. . . it was basically for bragging rights.” Since then it has become a fully insured race with more than eighteen sponsors. “The New Haven River is really unique,” McCall says. “It’s fantastic, it’s roadside so there is great access. What’s amazing is how stacked up it is. It has bedrock, rapids, boulders and a waterfall.” 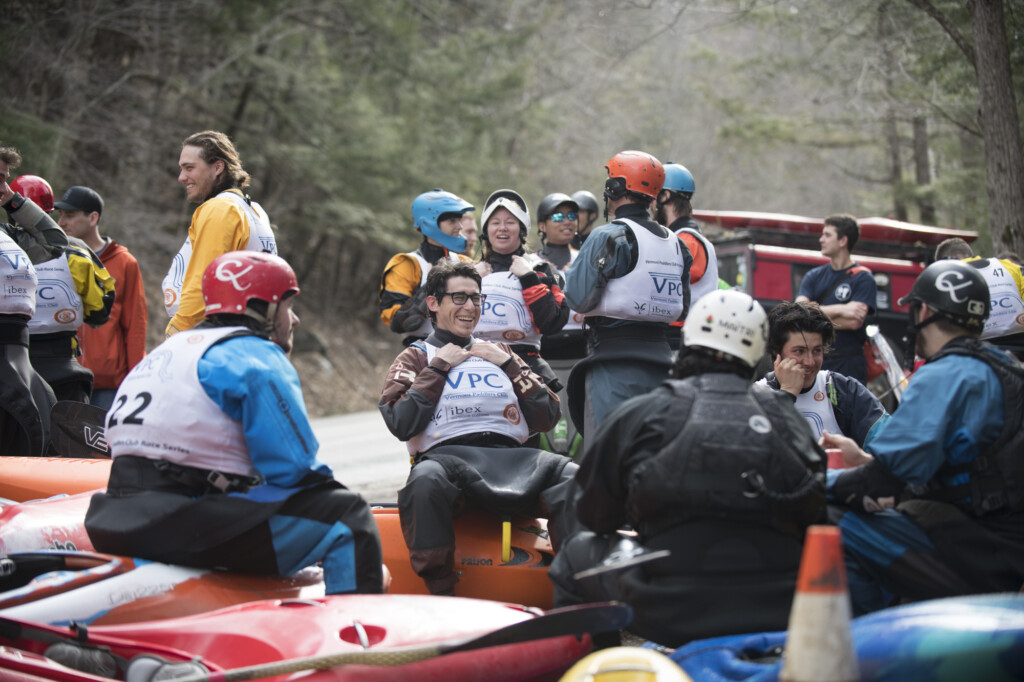 The temperatures this year climbed into the sixties and it surely felt like the first day of spring. Spectators lined the banks of the river to watch the racing action, some wearing tank tops, some with folding chairs, some with dogs, kids and various canned beverages. The water was flowing high and many paddlers flipped over in the whitewater, and either rolling back up or were assisted by fellow racers along the route. The dramatic finish line is at the bottom of Bartlett Falls and its fifteen-foot drop. Fans line the rocks above and cheer on the racers as they plunge over the falls. One can hardly ask for a better way to spend a spring Saturday. 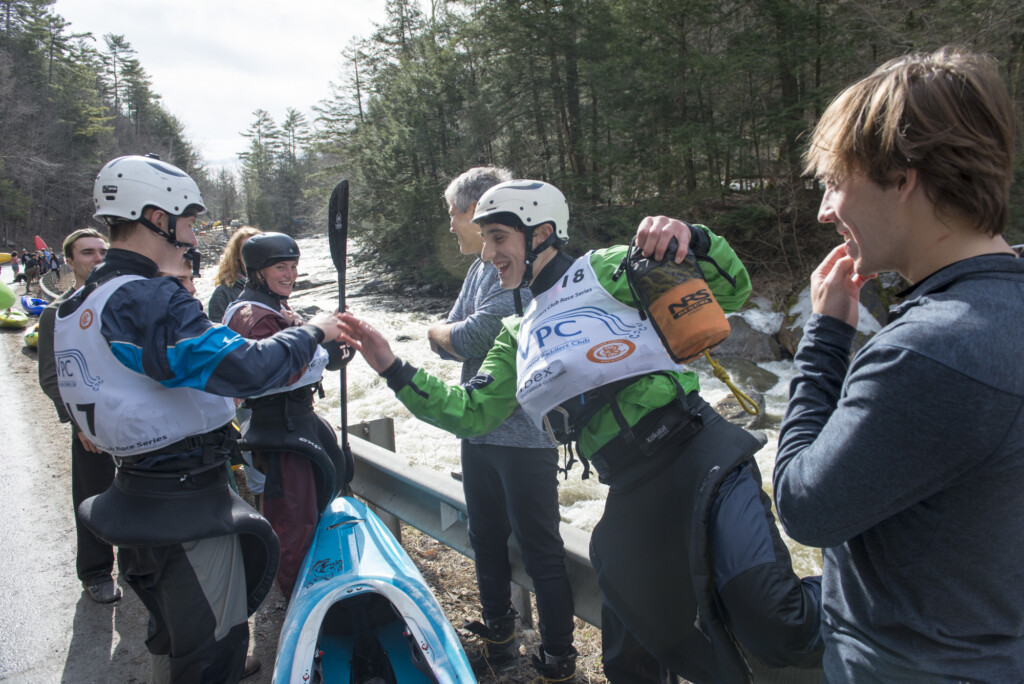 A few voices from the New Haven Ledges Race:

“I fucking love it,” says Lydia Blanchet, a student at Dartmouth College from Anchorage, Alaska, with a huge grin. “There’s something about going over a big drop that’s great.” 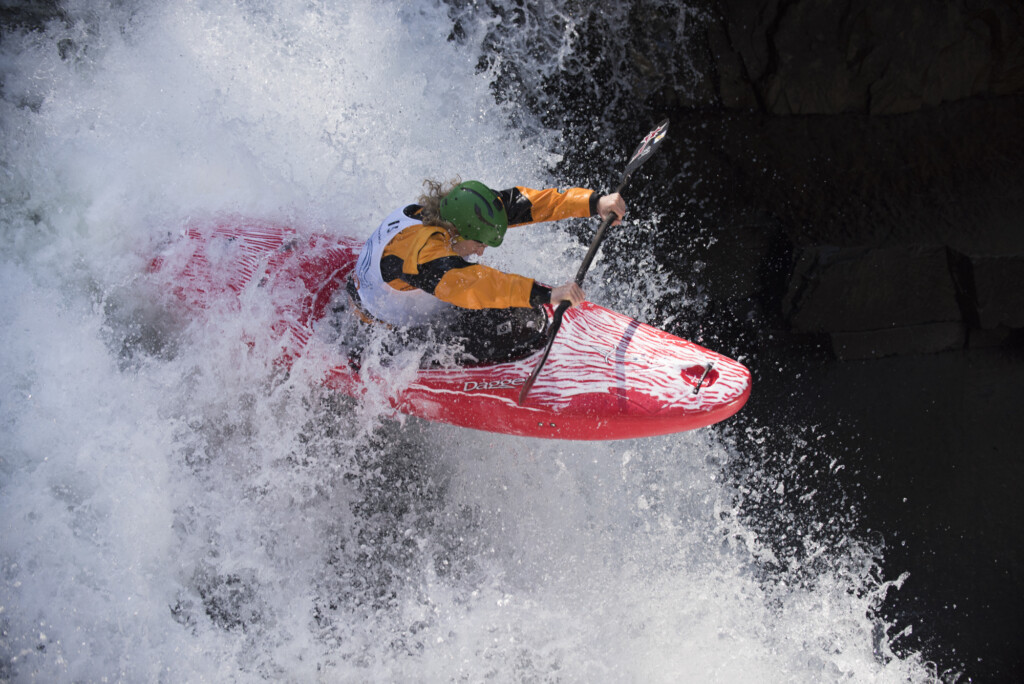 “Both of my parents paddled so I love it. It’s a big part of my life, “ says Jason Kahn of Cartago, Costa Rica.

“Always ask the locals which way to jump off a rock and go in the water and make sure it’s deep enough. That’s what I always told my kids,” says Fayston, Vermont resident Ellen Gluckman, a whitewater beginner and spectator watching the race.

Jessie Sterling from Richmond, Maine describes the feeling of “sendingToaster”, kayaker lingo for paddling over Bartlett Falls. The falls used to have a rock passage so small it was the size of a toaster. “It builds with anticipation as you meet the horizon line.” “That feeling of taking your last perfect stroke entering into a moment of weightlessness is heart stopping. There is nothing to do but smile as you land on the water below. It’s dangerously addictive. 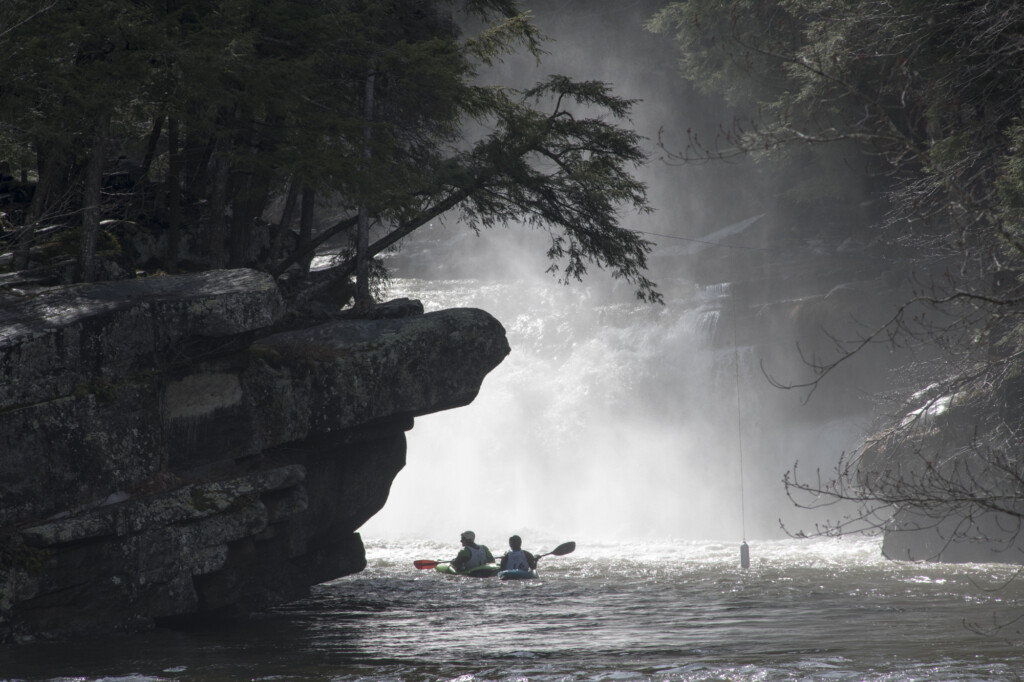